How did the Bible get so filled with things that have nothing to do with the messages of Jesus? That is one of many questions I have pondered over the last decade.  I want to study more about King Constantine and how the Bible was put together under his watchful eye. 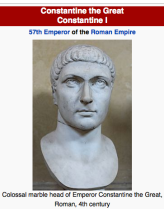 Here is the crux of what I know now.

Constantine was a king during the age where the Roman empire’s power was dwindling. He was losing his grip over his kingdom. Some say that is why he grabbed on to the idea of making Christianity a mandated state religion. I know he was not baptized until soon before his death so that puts his sincerity at question. Was he just covering his bases? There is very little historical text now available that pre-dates the first compiled Bible so we really can’t be sure just what is not in Constantine’s Bible or what was added. These types of questions need to be understood in order to put the Bible in its proper sphere of influence. Was it written by God or redacted to meet the needs of the most powerful world government of the time?

I personally take the Jeffersonian stand of Christianity to at least one degree or another. That is Thomas Jefferson’s belief that Paul took the simple message of Jesus and made it complicated. I’m sure he was well-meaning but given his background it was inevitable that he would add rule after rule on being a Christian.  After all he was educated and trained by the Pharisees of his time and if nothing else they were absolutely about rules. Upon serious reading of Paul’s many letter it is surprising how little his teaching overlap with any of Jesus’ word or messages.  In fact he seemed to know very little about Jesus other than his brief personal experience on the road to Damascus.

We know that the documents that eventually made up the first Bible were generally not written until at least forty years after the events took place.  Before that all the biblical stories were likely passed down as was very typical of the time via an oral tradition.  We also know that except for Paul, who was not one of those who sat at Jesus’ feet,  most of the other leaders of the early church were very likely illiterate.  This necessitated that someone else would take their stories and put them into literary form.  For the most part we still don’t know who those scribes or the authors actually were. Under these types of conditions it is very likely that myths and fables were included in the written text.  Thomas Jefferson believed that is how most of the miracles of Jesus were established. It was just overzealous people adding a little bit to enhance a point. Those who study other historical sources know this is a very common thing of human nature.  George Washington was almost a god in early America and many myths were generated  and recorded about him. The most similar is probably about chopping down a cherry tree.

In closing I am not saying that the Bible is without value simply because human foibles are contained in its text but it is important to understand that possibility when trying to put this document into the proper perspective in today’s church.  The messages of Jesus that are contained within these various writings, even though they were very likely tarnished by human actions,  are what is paramount to our following Jesus.  The Bible itself is just a means to convey those inherent messages.