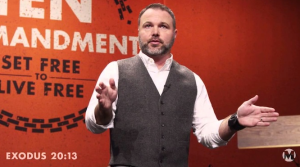 Mark Driscoll, the attention grabbing minister of the Mars Hill megachurch, is at it again. He’s pushing his badass Jesus who has, as he put it a few years ago, “a commitment to make someone bleed.” Driscoll has a personal need for a sacred tough guy because he has some sort of theological kink or character twist or… whatever, that leads him to declare, “I cannot worship a guy I can beat up.” It sounds to me like he’s looking for a swaggering gang leader to follow, not One who said, “I am among you as one who serves” (Luke 22:27)

I often say it that we must all seek to understand Jesus and his words on our own terms, we should not just accept what someone tells us. But seeking Jesus and inventing him are two different things. As mentioned in the source article Mr. Driscoll grossly ignores the gospel lessons in inventing his version of Jesus. I simply can’t understand how he can be the minister of the megachurch. It is very obvious from just these words that Mark is a very macho guy who sees the Jesus of the gospels as simply a guy who he could easily beat up so he uses a few verses from Revelations to “re-image” him.

I love the quote “God made man in is own image and man returned the favor.”  Mr. Driscoll doesn’t like a wimpy Jesus so he made a new version in his own image. How pompous is that? But for thousands of others to follow along like sheep ignoring the thousands of places in the gospels that tells a very different story is beyond me! Whoever goes to that church must have more testosterone than brains.

Everyone should seek Jesus on their own but that does not mean to make him into any image you desire. Sadly finding one verse in the Bible and then fabricating your own version of Jesus is not a new thing…..