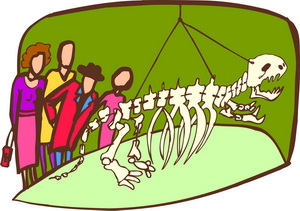 This is going to be a short post about the religious establishments of today. I hope this closes out my recent thoughts in this area. I really want to move on to other things about Jesus. This post is based on some words in the book entitled If the Church Were Christian by Philip Gulley. Here are those words:

We have built a vast institution based on these “hints” Jesus gave us.  But we should never delude ourselves into thinking that today’s church sprang directly from the mind and witness of Jesus.  All we have is extrapolation, a few bones upon which have been erected a larger organism.”

As Mr. Gulley pointed out further in his book this is like building a dinosaur skeleton based on just a couple of vertebrae. Its seems a stretch to do that but in reality that is what actually happens at least with dinosaurs.

These words by Philip Gulley have had a serious effect on my life. Up until I read them I, as most people seem to do, ignored that Jesus said very little about establishing a formal religion to replace the then current day Judaism. As Mr. Gulley says we have taken a few bones and erected a vast institution around them. Since we are actually so fragmented you might even say we have established many vast institutions and each one thinks that they are the only ones to truly follow Jesus’ few words in this area.

I am hard pressed to really know what the “proper” response to this dilemma should be? Most of what we know as the Christian church is actually based on the words of Paul not Jesus. I know Paul was a big time guy in the Jewish hierarchy so starting a new religious establishment is where he would naturally migrate. Was Paul inspired by God? At some level I’m sure he was but was it really Jesus’ intention to let Paul and a few others  show us the “rules” on how to live as followers of Jesus? I personally am just not ready to accept that premise in totality.