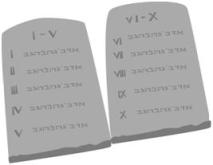 Let’s continue on with our journey on the history of sin.

Adam and Eve had offsprings who had offsprings who had offsprings… Just how that happened I don’t care to speculate. As the population increased they kept digging their hole deeper and deeper. Finally about 1600 years went by and God just decided to kill everyone but Noah and a handful of others and start again. But it seems that man’s genes, or whatever, were polluted by Adam and Eve and Noah’s descendents pretty much went down the same road as before. God sent personal messages to them several times during this period through middle men known as prophets. He basically told them that they were still ignoring what he wanted them to accomplish. They even killed many of the messengers he sent. Talk about total disrespect!

Now flash forward another 1,000 years or so to a guy named Moses. After getting the people of Israel freed from bondage in Egypt he was given a list of things that God expected his people to abide by. This list is known today as the Ten Commandments. God made it clear, some might say finally :), just what you are supposed to do. If you did anything against these commands then you sinned. Of course the Jewish people also made up their own list of sins over this time and it included things like what to eat, what to wear, and other such, some would say trivial things. But the list that Moses brought down from the mountain came directly from God himself and was certainly not trival. So, with this new list in hand God’s chosen people proceeded to pretty much ignore even the ones from God’s direct hands.  They locked them in a box and only took them out and looked at them on special occasions.

Ok, here comes another flash, this time about 1500 years or so. God finally got tired of sending messengers to his chosen people, they tended to kill all of them, and decided to come down to earth again himself to see if he could finally straighten them out. This time instead of coming as a burning bush he came down in the person of Jesus of Nazareth. Instead of just rehashing the original ten commands he condensed them down to just two. “Love the Lord with all your heart and with all your soul and with all your mind. This is the greatest commandment. And second is like it: ‘Love your neighbor as yourself'”. (Matthew 22:37-38).

So let’s wrap up the original questions. Just what is sin. Sin is not doing what God/Jesus commanded us to do. Are we doing a good job of even Jesus’ condensed list of commands? More on that the next time along with some other lists that have cropped up since Jesus.